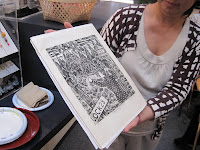 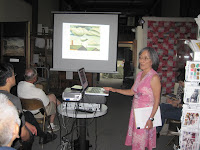 Another great turn out for the NJAHS SaSae evening program. It was a full house.

On 10/14/10 we saw a film about Henry Sugimoto called Harsh Canvas.

Some notes about the film:
-Henry wanted to become an artist since he was young
-He copied the art from his grandfather's house in the countryside of Wakayama Prefecture
-He traveled by ship to San Francisco where he met his father for the first time
-He worked in the apricot orchards of the Central Valley
-He moved on to attend UC Berkeley to become a dentist, but left in 1907 to become an artist
-He remembered the advice from his grandfather saying "a son of a samurai could never step back in retreat". He was inspired by this thought and moved to Paris to study art.
-He found a few other Japanese artists in France
-He returned to Hanford, CA to marry his high school sweetheart Susie
-He exhibited at the Oakland Museum not long after returning to California
-He taught Japanese School
After the Pearl Harbor attack in 1941 he and his family (Henry, wife Susie and daughter Madeline) were sent to the camp in Arkansas
-He smuggled two brushes, three tubes of paint, and a bottle of turpentine for his art
-Other internees discarded the canvas that they used to wrap their belongings
-Henry used this to his advantage, using the canvas as a surface to paint on
-He was afraid of what the authorities would say so he painted in secret
-One day the army came around to film a movie in the camp and they wanted to film him painting. He felt like a movie star. He relaxed and from then on, painted in the open
-After four years in the camp he and his family moved to New York
-Susie got a job as a secretary. Henry got a job designing textile plates and model design drawings in New Jersey
-His paintings were documents of Issei pioneers
-His work was displayed in Wakayama, Japan, like a mural in the Wakayama train station
-He had a solo show at the Los Angeles Museum of Art

We were then pleased to have a lecture by Artist, and Professor Betty Kano about artists in the camps. The artists:
-Hisako Hibi
-She was in the Topaz camp
-She was a painter who painted scenes of life in the camps like searching for coal to burn
-Chiura Obata
-He created paintings of nature with black ink on white canvases
-He was sadly beaten by fellow internees and left the camps to reunite with his son in St. Louis
-Hideo Kobashigawa
-He painted color paintings with sad overtones, like a portrait of downturned sunflowers
-Taneyuki Dan Harada
-He painted landscapes from the camps like one of the barracks in Topaz
-Mine Okubo
-She created black and white drawings and paintings. Her Evacuation work helped get her a job at Fortune magazine in New York

We also had wonderful surprises at the end of the evening. Mr. Lloyd Wake told us a story of his pursuit to buy a book from Henry Sugimoto. He sent him 50 dollars, but the book was only 30 dollars, so for the 20 dollars difference Henry sent him a wood block proof print. He graciously donated it to NJAHS.

Another nice gentleman Mr. Brandon Unruhe shared that his grandfather made some of the woodblock artworks in the SaSae exhibit at NJAHS

All round it was a wonderful evening of sharing and rememberance.
Posted by National Japanese American Historical Society during 3:10 PM No comments:

We had a successful panel discussion at the NJAHS Peace Gallery entitled MUSIC AND ARTS IN THE CAMPS. The panel included musician, jazz historian and author of Reminiscing in Swingtime George Yoshida, musician and musical historian Shirley Muramoto, musician, composer and ethno-musicologist Anthony Brown, and musician and composer Mark Izu. 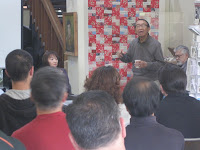 It was a lively and informative discussion that included the influence of jazz and swing music in the concentration camps of WWII and the segregated units of the military by George Yoshida. He also showed some slides of bands in the period.

Shirley Muramoto also spoke about the sustained teaching of traditional Japanese instruments and art such as the koto and the biwa, in camp. She had a slide show of photos of koto, biwa, and Japanese dancers from the camps. She played a recording that was made in camp with singing, koto and biwa.

Mark Izu talked about getting people ready to tell their stories and played a short CD by his storyteller wife Brenda Aoki. 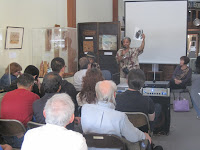 Ethno-musicologist Anthony Brown recounted how his parents met through jazz at an SRO club in Japan. He also spoke about how jazz is a medium of expression that is free and creative and that Asian American Jazz has its roots in the social conditions of the 1960's and 1970's. These conditions included the movements for equality and liberation by Third World and Asian people in the U.S. such as the Civil Rights Movement as well as the anti-war in Viet Nam movement.

All in all it was an interesting and informative talk and was well received by the audience. The audience included students and old. 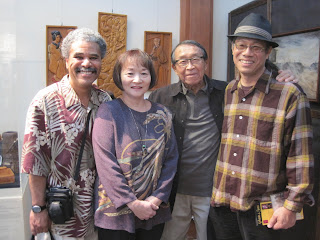 
Thank you very much, everyone!
Posted by National Japanese American Historical Society during 12:10 PM No comments: