Transcription for the Interview of Hatsuye Nakamura

I have just finished the transcription work for the Interview of Hatsuye Nakamura. Miss Nakamura is a former internee from the Tule Lake Internment Camp during the WWII. During her interview, she talked about her experience in the camp as a newlywed bride clinging onto her husband as they adjusted to their abhorrent predicament during the Japanese American internment period. Time and time again, she mentioned how fortunate her family was during the trauma and how resourceful they were to their environment. She stressed on the proudness of the Japanese race. She said that because Japanese Americans are a race of accepting, yet proud people, her family was able to make it through the Japanese American internment.
Hatsuye Nakamura was also very appreciative of her husband's talents as a civic mind, a well-established pharmacist and an elite member of the Japanese American Citizens League. She especially cried during the interview when she had to talk about her children's correlation to the internment camp experience in Tule lake. One memorable quote would be "I don't do these things for sympathy!" as she sobbed. It enphasized how proud she is that she's gone through such a historically significant experience with a gamely mindset and able to share it with us today in order to instill the importance of social justice in our society.
Though Japanese American were not able to seek a huge amount of monatery retribution for the mistreatment they received in the internment camps during the WWII, they did receive aids from the government to educate the current generations about their war stories of a demoralized government during their time.
I personally learned a lot from transcribing for Hatsuye Nakamura. I learned that "Desperate times call for desperate measures." is one of many excuses the U.S. government used frequently to cover up the hideous nature of its legislative actions in the past. I have deep sympathy for Miss Nakamura and anyone else who's had internment camp experience in the past. From this point on, we should vehemently voice our opinions about any subject that contributes to social injustice and rectify the problems as effectively and efficiently as we can as Americans with good will.
Posted by National Japanese American Historical Society during 3:12 PM 2 comments: 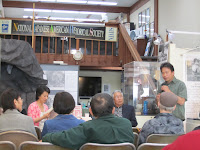 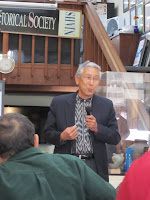 On Saturday, April 9, 2011 from 2-4 p.m., NJAHS hosted a book signing event for Ronald Nakasone's book Okinawan Diaspora. Nakasone first wanted to learn more about the Okinawan culture in honor of his mother. He released this book two years after the hundred year commemoration of when the Okinawans first immigrated to Hawaii in 1900. Although it is unsure where exactly the Okinawans came from, many believe they came from many countries and mixed together. They are a very spiritual civilization who have many native myths and songs. Although the Okinawans are a small culture they are still alive due to the fact that they are always threatened. Their culture and traditions are successfully perpetuated from generation to generation.
After Nakasone's discussion of his personal experiences as a Japanese American and his book Okinawan Diaspora, Rosalyn Tonai helped facilitate a Q&A session with the audience. Most were from the Bay Area and a few had ties to Hawaii. People continued to trickle in after the event started. At most, there was thirty people sitting in NJAHS listening to Nakasone speak. Wesley Uenten, a San Francisco State University professor also shared some traditional Okinawan music as well on his musical instrument, the sanshin.
Overall, my experience of helping out with this book signing event for Nakasone's book Okinawan Diaspora was an enjoyable one. More people than I expected showed up which was nice. Perhaps since the Cherry Blossom Festival was going on too, more people walking by happened to just stumble on into the gallery. Nakasone was upbeat and enthusiastic, throwing in some jokes here and there. The atmosphere was very laid back. The lovely event ended with the audience singing along with Wesley as he played.
Posted by National Japanese American Historical Society during 11:44 AM No comments:

On Saturday, April 9, 2011 from 2 pm to 4 pm, there's a book signing event with Reverend Ronald Nakasone - Author of Okinawan Diaspora. The word Diaspora, according to my Asian American studies class Professor, Dr. Wesley Ueunten, means the spreading of the people. In other words, the dispersion of a group migrating from their home country. In this case, the book Okinawan Diaspora is about the Okinawans' diasporic experiences in the continental US, Canada, Brazil, Peru, Argentina, Bolivia, Mexico, Cuba, Paraguay, New Caledonia, and the islands of Micronesia. The book stresses on the geopolitical issues from an East Asian point of view.
Reverend Ronald Nakasone started off by talking about a lot of his own firsthand diasporic experiences of being a Japanese American. Hostess Rosalyn Tonai helped orchestrate a Q & A session afterwards. Rev. Ronald Nakasone then took a few questions from a crowd of audience. He also introduced to the audience a music CD he sells in relation to his book. Dr. Wesley Ueunten played a couple of famous Okinawan songs for the audience using his signiture musical instrument called sanshin. The crowd was singing along with Dr. Ueunten's songs. Finally, Rev. Ronald Nakasone did a autograph signing session of copies of his book. This concluded the book release gathering for the book Okinawan Diaspora.
I had a good time attending the book signing event, especially because it was during the Cherry Blossom Festival. Though the event was solemn, the atmosphere was lively. I learned from the candid speech delivered by Rev. Ronald Nakasone from his firsthand experience. I also enjoyed the music delivered by Professor Ueunten immensely. Overall, introspectively, I felt that I shouldn't take granted for the good experiences I've had as a US citizen.
Posted by National Japanese American Historical Society during 8:01 PM