Wow what a day. BART was delayed. Hundreds of people were packed onto the platforms. I almost got hit by a rushing car while driving home with my mom. All in one day.

At CAIR( Council on American-Islamic Relations) we met with the Director and the interns. I never really have been close with a Muslim so it was interesting to get to know them. A lot of them were first or second generation students. They worked at the non - profit organization CAIR which provided assistance to people with civil liberty problems. There was a center that provided a support system to help muslims in the community. In the community center there were two rooms for praying, a school for all students including non-muslims, and even a restaraunt. They said that during the weekends, hundreds of people come to hangout.

All in all it was a very nice experience. I felt it was cool to see a community that is very close knit. It is sad that news only portrays the chaos and terrorist attacks. The Muslim American community has a lot to offer people.
Posted by National Japanese American Historical Society during 6:12 PM No comments:

Today we went to the Council on American-Islamic Relations (CAIR) in Santa Clara, CA. It was super interesting hearing everyone's stories about prejudice, growing up, and other topics. I didn't make the connection, but after watching the documentary Caught In Between, I realized history can and does repeat itself. Think about the attack on Pearl Harbor and the Twin Towers- they are so alike. But, we have to learn from our past, we cannot have history repeat itself because that would be a failure on this country's part. So I am glad there is a council to represent those who need representation.
The day was filled with plenty of activities, first we had a discussion. I really enjoyed hearing everyone's stories. After that we had lunch. It was halal friendly, so it was cool getting to experience that. Halal is the Islamic rule of eating similar to the Jewish rule of eating called kosher. So the animal being eaten needs to have been raised a certain way, slaughtered a certain way, and no hoofed animals like pigs.
After that, we went across the street and visited their community center. There was a weekend school for kids, a gym, and even a mosque. I really enjoyed the visit. It was so cool having the privilege to go in. Plus, now I can say that I have been in a mosque!
[Alison]
Posted by National Japanese American Historical Society during 5:55 PM No comments: 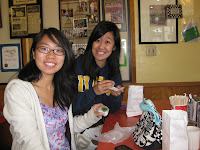 Hi this is Alison with another update on my manju quest. This morning I went to Benkyodo Co. with fellow NCI intern Alison! Can you believe it, there are two NCI interns with the same name! It was so cute, while eating our delicious manju, a man comes up to us and says "UC Irvine? You guys must be so smart! If only I could take a part of your both of your intelligence, I'd be so smart!" It was really cute and funny.
So today I ate a green manju with chunks of azuki (red beans). The mochi was so smooth and fresh and I gotta say I love azuki beans, especially when it isn't 100% smooth. So this was a nice treat. 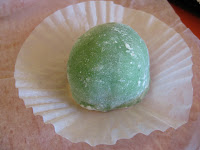 Today was an interesting day. Its Friday, so I was pretty tired from the past week. This is my first time working so I am trying to make the best impression I can. I usually try to talk to people before we begin work. It helps people to relax and release some tension. For some reason though, today was just a tough day. Me and Alison talked a little about what we were gonna do this weekend, Pete came by and tried to talk to us but me and Alison were just glued to our seats trying to watch the movie, a man came by saying he knew my dad. I wanted to get to know him more to get to know my dad a little more but I was just dead.

Work was pretty laid back today. Our boss realized that we needed to get caught up history for our interviews the following week so she gave us a list of movies to watch. There were ten movies so me and Alison hussled to get through them. One was a short movie about businesses that had survived after the internment camp. Another was about Japanese Peruvians who were kicked out of their homes due to racial tension. Another movie we watched talked about how some people had health issues after camp because of all the dust. It was all very intense and it angered me that they are taken so lightly in history books.

It was upsetting to see people treated so badly. I feel the films have made me angry. I am still trying to process them.
Posted by National Japanese American Historical Society during 7:53 PM 1 comment:

Benkyodo Co.- one of the original businesses in J-Town Ken and I took a tour of Japan Town this week. One spot that really touched our hearts (and our tummies) was Benkyodo Co.. Benkyodo Co is located in Buchanan Mall between Sutter and Post St., which is across th

rom the Peace Plaza. Ken and I found out that Benkyodo Co. originally opened in 1906 (photo found on Discover Nikkei.org), but was closed during the war. It's great to see that it still is around today

and continues to offer high quality goods. Beknyodo Co. is part shop and part diner. There's a small counter for customers to order burgers and sandwiches. If you turn around, you'll find delicious snacks and treats. There is sembei (rice crackers) and manju. Manju is an absolute treat for me and for many Japanese Americans. Manju

is made up of sweet sticky rice and can be filled with sweet bean paste called an. There are also baked manju varieties, which are more bread-like.

This morning I went with fellow NCI intern, Rachel. We tried a variety of freshly made manju. I tried two baked varieties and she bought three softer kinds. Benkyodo Co.'s manju is so soft and delishius that I will make it my goal to try every type of manju offered before my internship ends. So keep checking this blog for updates on my manju quest. 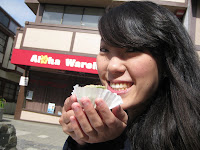 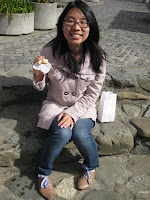 Posted by National Japanese American Historical Society during 10:14 AM No comments:

Hi everyone,
My name is Alison and I am the second NJAHS intern through the Nikkei Community Internship program. I will be interning at NJAHS for eight weeks. I am really excited to work here in J-Town.
Here's a little about me:
I live in Torrance, CA and go to school at Cal Poly San Luis Obispo. I am studying Recreation, Parks, and Tourism Administration.
I'll do my best to keep this blog updated as I go through my internship. So make sure to check this blog often!
Posted by National Japanese American Historical Society during 10:09 AM No comments:

Hi everyone!
NJAHS has two new interns. They've started working with us yesterday. Get ready for tons of blog posts!
Posted by National Japanese American Historical Society during 10:36 AM No comments: